How To Use Sandbags Part 2 - Ringing Boils With Sandbags

The following is from the U.S. Army Corps of Engineers. They have a complete and thorough guide called, Flood Fighting: How To Use Sandbags. They have granted permission for us to post this and we thought it was a VERY informative guide on how to use sandbags (typically burlap bags). So thanks to them for this great information so here's part two: ﻿

A boil is a condition where water is flowing through or under an earth structure (such as a levee) that is retaining water.  Free flowing water wants to move to lower elevations.  If a levee is stopping floodwaters, the water may be able to find weak points to enter.  This action is called "piping".  If the water finds a large enough path, the flow will become visible, and is a serious threat to the integrity of the levee.  Most boils occur in sand, silt, or some combination.

A boil is found on the landward side of the levee, or in the ground past the levee toe (the exact distance varies with local conditions).  Possible boil sites can be identified by free standing or flowing water (other than culverts, pumps, etc).  A boil can be found only by close inspection.  A prime indicator is water bubbling (or "boiling"), much like a natural spring.  Another is obvious water movement in what appears to be standing water.

Carefully examine the water for movement.  Boils will have an obvious exit (such as a rodent hole), but the water may be cloudy from siltation, or the hole very small.  If there is any movement in the water, carefully approach the site, disturbing the water as little as possible.  Let the water settle, and look at the suspected site.  If you see the hole, examine it carefully.  If the water flow is clear, there are no problems as yet.  If there is no distinct hole, the water flow is not a threat.  Monitor the site regularly for changes, and take no other actions.

A dirty water flow indicates that the soil is being eroded by the water, and that could mean failure of the levee.  A boil ring is the best solution.  The idea is to reduce the water flow until the water is flowing clear, but not to stop the water flow.  This acts as a relief valve for the water pressure; the water continues to flow, but is not eroding the material.  If the water flow is stopped, the pressure will remain, and another boil will form.

Ring the boil with sandbags, with the first bags back 1-2 feet from the boil.  More, if the soil is unstable.  Build the first layer in a circle, 2-4 bags across, and then build up, bringing each layer in.  If possible, keep the interior face straight.  Build the ring wall with the means for water to flow out, leaving a gap in the wall, or using pipes.  Adjust the flows until the water slows, and becomes clear.  Monitor the ring wall constantly.  Raise or lower the height of the wall as necessary, maintaining a slow, clear flow.

The height should be only enough to create enough head to slow flow so that no more material is displaced, and the water runs clear.

Do not sack a boil which does not put out material.
The entire base should be cleared of debris and scarified.
Tie into the levee if the boil is near a toe.

All joints must be staggered.
Be sure to clear the sand discharge.
Never attempt to completely stop the flow through a boil. 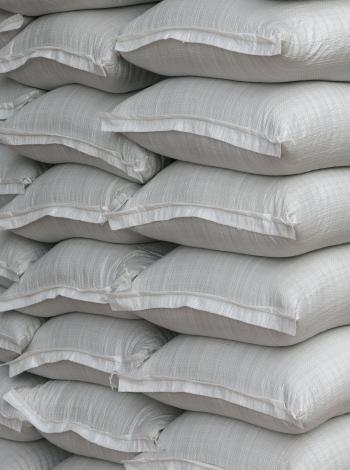